Bill Fontana, one of the world’s leading sound artists, will be show casing River Sounding, a walk- through sound and video installation at Somerset House from 15 April- 31 May 2010.

Somerset House was built with direct access onto the Thames – the home of Admiral Nelson’s Navy Office with boats entering through the building’s great arch on the river.

Bill Fontana has collected hundreds of hours of audio and video from above and below the suface of the Thames, from Richmond to remote locations in the Estuary, to reveal the hidden stories and sound-worlds of the river.

Taking the lift to the bottom floor and walking out into the lightwells and Dead House- spaces far below the courtyard, usually closed to the public. The weather is awful and its raining heavily. We run to get inside a sheltered space, ending up in a dingy tunnel saturated by a green light. The space is dark and feels claustrophobic with pigeons quietly walking and cooing above our heads along dusty pipes, one swoops down and flies towards a projection of pedestrians and cars sweeping across a busy Tower Bridge.

Moving deeper into the tunnel and past the projection, the whole thing is atmospheric and even a bit unnerving.  Immersed in a space resonating the sound of water flowing, with distant ships’ horns, bells and the rumble of engines- blasted from loud, impressive, giant speakers.  The internal sound of the river itself has been captured by hydrophones suspended beneath its surface.

But as it is, we might think of the Thames as a river of ghosts. Of the victims of its worst disaster, when the Princess Alice sunk in 1878 drowning 600, or of the 58 residents of Canvey Island claimed by its waters in the 1953 flood, or of the 17th-century gentleman usher whose tomb we encounter in a passageway buried beneath Somerset House’s courtyard. But also the ghosts of abandoned warehouses, relics of obsolete industries, that line the river’s banks, or of the once mighty, now emasculated, tributaries – the Fleet, the Westbourne, the Tyburn – now reduced to trickling pathetically out of their outlets in the embankment walls. Martin Cullingford is editor of Gramophone online 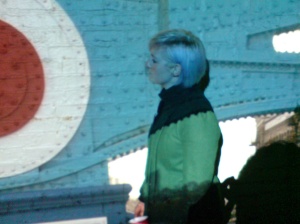