I’ve been invited by Iain Barber, Head of Biological Sciences at the University of Leicester to take part in a field studies trip in Slapton, Devon as part of the Zoology Degree. This will be a great opportunity to record birdsong in a variety of habitats across the area and to gather data on bird behaviour to inspire new artwork. I arrive at 10pm with a car full of sound recording equipment. After being shown to my room, I set up the microphones in advance of tomorrow’s 5am alarm.

In the morning I record the dawn chorus at a wooded area in Slapton using a pair of DPA 4060 microphones on a stereo bar with Zoom H4n, which provides an omni-directional soundscape of the area. These are positioned deep into the wood with a reed bed close by.

I also use an M-S set up with Sound Device, which I’m slightly in awe of and have been kindly loaned from Hear This Space’s Simon Smith. This set up provides a more directional point of focus for recording birdsong and is positioned on a pathway between the trees. It’s a good start and I can hear the Cetti’s Warbler, along with the Reed Warbler, Blackbird, Blackcap, Robin, Mallard, Great Tit, Carrion Crow, Pheasant and Herring Gull (in the distance), Wood Pigeon, Jay, Chiff Chaff, Wren and 3 Canada Geese flying above.

There’s something spectacular and meditative about listening to birdsong especially when you’re listening to it through headphones, amplified by microphones. The whole experience is completely immersive and one that I can happily indulge in for hours.

The students on the Zoology course are devising their own projects and observing and gathering data on different species, including the Cetti’s Warbler to explore the diversity in male singing between different territories. Another project is underway to observe Robins and the difference in numbers of species found in the town and rural environments. Other projects include observing the behaviour of Rooks (there’s a tree full of them on-site!), examining the size of cowpats in relation to the number of dung flies and their courting behaviour. Monitoring Great Crested Grebes behaviour in particular foraging and courting activity and observing and measuring the diving synchronicity of Tufted Ducks! I’m hoping to use some of this data as inspiration for a new piece of artwork to visualise their findings, along with the sound recordings I’ve gathered.

At lunch I record using 4 channels (so 4 microphones). Using 2 above water to capture a stereo image and 2 underwater in the reed beds… although not much can be heard in the water, probably because of the time of day and the fact the sun isn’t out. However, the recordings above water are interesting and feature the Cetti’s Warbler, Reed Warbler and the sound of the reeds gently blowing in the wind.

On my way back I hear the Rooks in the trees and cant resist recording their harsh and aggressive sounding calls, especially as I haven’t yet recorded this species, so this was a great opportunity to add it to the birdsong register and to make plans to create a visualisation of their song! 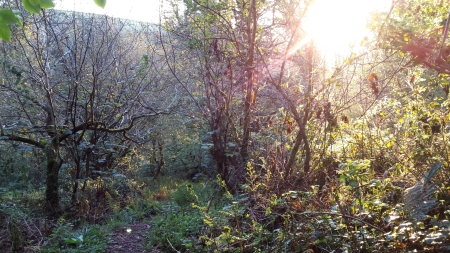 A 4am start to get up and out and in position to record in the ancient woodlands at 5am. It’s still dark at this time, especially in a dense wood, but Iain helps to carry the recording equipment, which is a life saver as we head down a steep pathway into the wood.

I set up the microphones (using a torch to help me see!) The DPA’s are in the middle of a narrow pathway with woodland on either side and the M-S set up is off to the right hidden within the trees. In this type of environment extra long cables are a must, as it means I can move around without interfering with the recordings and there’s more chance of birds getting closer (if you’re lucky) to the microphones to share their songs.

Whilst listening from 5am – 6am I heard a Robin, Great Tit, Blackbird, Chaffinch, Blackcap, Pheasant and Herring gulls (in the distance), Blue Tit, Wood Pigeon, Carrion Crow and a Chiff Chaff… but I’m sure there will be more birds to identify once I listen back to the recordings a few times! A background rumble can be heard on the recording, which I believe is either the sound of the sea/boats nearby.

Lunchtime was spent looking for interesting shaped stones on the shingle beach and recording the sound of the sea using my DPA’s, whilst eating sandwiches and cake- perfect.

My last early start and I decide to head back to the reed beds as the recording I made on Sunday at lunchtime didn’t really capture the birds at their best and loudest. This time (at 6am) they could be heard particularly well, along with the song of the Cetti’s Warbler.

I head back out before lunch to record at the Fresh water lake, which runs parallel to the sea. A Coot busy building a nest and a mallard can be heard, with the sounds of a Robin and Chiff chaff in the trees behind. It’s a lovely sunny day and I can’t resist sitting by the sea and recording the sound of the waves again…. This time taking the M-S set up (with windshield) and a pair of hydrophones to record underwater and the sound of the waves lapping the shore.

I’m really grateful for this opportunity to be able to take part in a field trip with students at the University of Leicester and to learn about the projects taking place, along with the hours of gathering research and analysing data that each group has been working tirelessly on. I’m also fascinated to learn how students will present this data and how I can be inspired by this information, whether its displayed as a graph, text or a map, so that I can visualise this to create a new artwork. Listen to all 8 sound recordings here

0 comments on “Recording birdsong in Slapton”