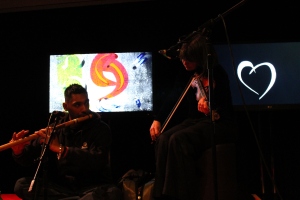 Rehearsals for The Red Species List are well underway at Attenborough Arts Centre in Leicester, where sound and visual artist Lucy Stevens and musicians, Rishii Chowdhury (tabla), Waqas Choudhary (bansri – Indian flute) and Eleanor Graff-Baker (violin) are working together on a new commission to create a musical and visual experience, inspired by the songs of endangered birds.

This concert is a commission to respond to the current exhibition by Lucy + Jorge Orta at Attenborough Arts Centre. The work of this internationally acclaimed duo questions the social and ecological sustainability of our planet. With Symphony for Absent Wildlife, being of particular influence on this new work due to its comment on endangered species. The audience enter a darkened room, where they encounter an orchestra of woodland ‘Spirits’, wearing costumes made out of reclaimed Red Cross felt blankets. They perform a concert on wooden bird whistles. The masked figures recall the spirits of the once abundant wildlife across the Albertan plains: bison, moose, wapiti, wolves, grizzly bears, and eagles. There is also species from other places, highlighting the global importance of this issue.

This concert concentrates on declining birds in the UK and was given its title, after the traffic light system: Green, Amber, Red list- to indicate a level of conservation concern, according to population and breeding status, with Red as the highest conservation priority. The latest assessment by WWT and Birds of Conservation Concern 4 shows that 67 species are now of ‘highest conservation concern’ and have been placed on the assessment’s Red List, which accounts for more than one-quarter of the UK species. In December 2015 the Curlew and Puffin were added to the Red list because of pollution and declining food sources.

Stevens’ art practice examines the acoustic ecology of the natural environment using field recording, digital illustration, drawing and printmaking as a tool to better understand the diversity of bird species and the wider issues of biodiversity. The work explores the relationship between humanity and nature; including the desire to communicate, interpret and understand bird behaviour through visualising birdsong.

For this project she has created three video works which showcase a variety of methods for visualising birdsong using printmaking and drawing, including a video showing her drawing the sounds of birdsong in time to the soundtrack, and creating over 200 mono prints and selecting 18 to represent the songs of endangered birds.

The soundtrack composed by Stevens features the songs of 25 birds, gathered using a combination of her own field recordings and those from Sound recordist Geoff Sample and Alan Burbidge and Paul Pratley from The Wildlife Sound Recording Society. The soundtrack has been created using only the sounds of birdsong, including the harmonies and the drones, which have been stretched eight thousand times or more to create a completely different sound, some haunting and some mimicking the human voice.

The musicians will respond to the soundtrack of birdsong using a combination of structured verses and improvisation, using a mix of Western classical and traditional with Indian classical and folk music styles. The importance of reconnecting the music with nature is highlighted through the sensitive approach taken by this unique trio, when responding and mimicking the songs using the pitch of the bird’s voice as a key note, to produce an evocative and energetic performance.

Come early and visit the Lucy + Jorge Orta exhibition on until 7.30pm.